Your Body is Endless: The Tattoos of Dave Gahan

Here on DGD, we like to primarily focus on the endless body of work that is Dave's music. But you know what else is a seemingly endless body of work? Dave's body, itself! That's right- we're talking about his tattoos. So, in this article, we will take a closer look at each and every one of Dave's tattoos, past and present, and if possible, find and explain the story(ies) behind them. I want to thank Tumblr user mijamija1234 who gave me the idea for this article.

This is Dave's first tattoo, which he acquired at the age of 14! He had acquired it "at Southend seafront, by a man called Clive." Dave described this Clive fellow as having "a tattoo round his neck — 'cut here', with all the dots. He was like a sort of sailor guy, perfect."1 Dave also referred to this particular tattoo as "a collector's item" because "sailor" tattoos or "old-school" tattoos, as they are colloquially called, were a dying tradition in the mid-20th century as tattoos in general were looked down upon. So, to have this kind of a tattoo is a mark of ultimate badassery, kind of like owning a personally-signed copy of Violator on vinyl or something.

Dave hasn't disclosed what this tattoo was or why/when he got it, but it was known to be removed around the early part of 1983. It also left a gnarly-looking scar in its wake and quite a bit of swelling- so much so that Dave had to perform with his arm in a sling for some shows during A Broken Frame Tour.2 That's because during that time period, the only commonly available tattoo removal procedures were quite invasive and painful, some of which included dermabrasion (physically removing the top layers of skin), applying Trichloroacetic acid (yes, acid), and salabrasion (scrubbing the skin with salt), among other things. The use of lasers was still in its infancy and even then, those early forms left quite a bit of scarring. Dave hasn't had any more of his tattoos physically removed since then and it could very well be because of this experience.

"They're my warpaint...They all mark a time and a place."3

Near the top of Dave's left arm is a tattoo of a small rose with an eye in the middle. He said that he got it as a "kid".4 Later on, though, in the early 1990s, he eventually ended up completely covering this tattoo with another one- the Celtic cross because the former "was just too puny."4

On Dave's right arm near his shoulder is a tattoo of a snake that is entwined around a vine. In the middle of the vine is a flower and human skull. It is not clear what this tattoo means to him and why he got it, but he did appear to acquire it sometime in late 1988 or early 1989.

"...I've had lots of different things done to my body that mark different moments of my life, and I like that. I don't regret it. With tattoos I think a lot of it depends on who you're hanging around with, ha ha ha! Lots of different things go towards the kind of things you do to yourself throughout life, ha, some are stupid but you know, there's loads of things you do that were probably necessary to go through. You live and learn though, yeah, good saying!"5

As mentioned earlier, in the early 1990s, Dave got a Celtic cross tattooed onto his upper left arm in order to cover up the rose tattoo. The significance of the symbol is not immediately known, but it could very well be a tribute to the Irish ancestry of his stepfather.

On the upper right side of Dave's chest is a tattoo of the Buddhist/Hindu "Om" symbol, "which represents every sound in the universe," according to Dave in 1993.6 His second wife, Teresa Conroy, had this same tattoo on the same spot (and she still does!), though hers is slightly smaller. Dave originally got this tattoo in order to match hers.

"It becomes very addictive and, unfortunately, I have that kind of personality, so I got carried away with it. You know, in retrospect, it's like how many times can you look at the same drawings on your body? It becomes a little old after a while. But it's cool. I did it. It's a reminder of the times."4

On the upper left side of Dave's chest is a tattoo of a phoenix, said to symbolize his "spiritual rebirth."6 Ironically, this was not at all referring to the rebirth that we all associate with him- namely, the series of events that occurred in the late 1990s starting with his near-fatal drug overdose and then when he finally emerged out of his addictions as a sober and clean man. Rather, this was referring to a "rebirth" of sorts that Dave claimed to have felt in the early 1990s after he had left his old life in England to live in the US (and abandoning his first wife and son in the process). Either way, the phoenix symbol is not at all out of place for Dave, is it? Think of his later successes as a solo artist and with Soulsavers, his close brush with cancer, and the sheer longevity with Depeche Mode, and the themes of rebirth and renewal are rampant and very fitting for his life.

This Celtic dagger adorns the inside of Dave's left forearm. "This one here I had done when I was using dope really heavily," he told Irish writer, Olaf Tyaransen. "I kind of meant it to mean I might as well be stabbing myself, kind of thing."3 Also, right below the hilt of the dagger, are the letters TCTTMFG. "That was done for my second wife. It means Theresa Conway [sic] To The Motherfucker Gahan cos I'm the fucker that married her."3 Even though he is obviously no longer with Teresa, Dave still has this tattoo because, as he put it, "It's a good reminder not to repeat the same mistake."3

On the same arm between the Celtic dagger and cross tattoos is a graphic of a heart with a sword or dagger piercing through it, covered in black flames. Dave hasn't said, himself, what this symbolizes but Aidin Vaziri from SFGate, who interviewed him during the Paper Monsters era described it to Dave as "you're trying to say that maybe you like the concept of love but feel a little ambivalent toward it to the point where maybe you might even hate it and try to stab it but still think enough of it to get a tattoo of it instead of just a tiger or something," to which Dave just said "Mm-hmmm" initially, but then went on to say, "Right. I think, especially through the last few years, I see that much more clearly. It's really important to move forward and keep challenging yourself and keep trying to live and experience new things and put yourself in situations that are sometimes a bit fearful. If you're scared, do it scared but just move forward. It's become a bit of a theme in my life, and I'm certainly reaping the rewards right now."4

"I regret all of them. I think I had some weird sense of putting myself through a lot of pain and, from that, I thought I was becoming stronger."7

Arguably, the "wings" tattoo that Dave has on his back has to be the most impressive. Its width spans from one shoulder blade to another and goes all the way down to the center of his back. It was done in Los Angeles in 1993, took 10 hours to apply3, and the graphic, itself, which is an old Celtic symbol used to ward off evil, was apparently done as a good-luck charm of sorts. "It was like my wings, really, for the tour..." Dave told NME at the time. "It was, like, my weapon for the tour — if you can do this, you can do anything, y'know? If you can sit under the needle for ten hours, you can do anything, man...[It was] pretty sore for a while. You forget how many times it's nice to do that (he stretches), and you can't for about two weeks. It really killed me. Then of course we went into rehearsals, it was funny. But I had to have it done, I had to do it. Charlie, Bob's younger son [referring to Bob Roberts, a Los Angeles tattoo artist], drew it on my back. He worked on it for ages. I have to go back, actually. He's missed a few bits out."1 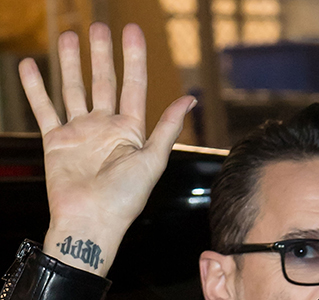 After many years of not getting any more tattoos added to his body, Dave took the plunge in 2012 and got his children's initials tattooed on the inside of his right wrist. The letters, "JJSR", stand for Jack, Jimmy, and Stella Rose. It is also in the name of his publishing company, JJSR Productions Inc.

On November 20, 2017 at Frith Street Tattoo in London, England, while on Depeche Mode's Global Spirit Tour, Dave acquired a tattoo of a swallow with the words "Jennifer Forever" over it applied to the inside of his right forearm as a tribute to his wife of 18 years by that time. This tattoo is right next to his first eagle tattoo with his name so no doubt the placement of it has significance, as well. Just like his original eagle tattoo, swallows are also common in sailor tattoos. Swallows also symbolize true love and loyalty.

"Apparently, my father...I didn't know this at the time because he left when I was six months old was covered in tattoos as well, so I think it must be something that's in my genes."3

The knuckles on Dave's right hand have tiny stars tattooed on them, very similar to the 2 tiny stars to the right and left of the "JJSR" letters he has on the same wrist. It is possible that the 2 tattoos were acquired at the same time and are related.

Okay, these are not tattoos per se, but I figured this also kind of belongs here as they are examples of ink on skin at the very least. Dave apparently likes to use the back of his hand like a sticky note, for things like reminders and shopping lists. In the image above, he has his son's name, "Jack," written on the back of his hand in what appears to be ballpoint pen ink. Is it a reminder to call him? To buy something for him? Who knows!

Which of Dave's tattoos are your favorites? Do you have any tattoos that are inspired by Dave and/or Depeche Mode? Did you think this article merely was an excuse to post pictures of shirtless Dave (you might be right)? Please comment below!