Here are some miscellaneous facts, tidbits, and dispelled, non-blasphemous rumors about Dave Gahan that you may or may not know. These are things that don't really fit anywhere else on this site but are interesting enough to at least have a mention!

Did Dave really sing a song in Simlish?
What is the writing sometimes seen on the back of Dave's hands?
Is it true that Dave does not like the sound of his own voice?
Does Dave own any companies?
Can Dave play any other instruments?
Has Dave written any movie soundtracks?
Has Dave appeared in any TV commercials?
Did Dave once try to open his own restaurant?

Did Dave really sing a song in Simlish?

Yes, he and Depeche Mode redid one of their songs in Simlish. Simlish is a fictional language created for the Electronic Arts (EA) Sims game series whose creation was inspired by various real languages like Ukrainian, Tagalog, and Navajo.5 In 2005, EA and DM teamed up to re-record the hit single, "Suffer Well", in Simlish. The song was featured in the game, The Sims 2 Open for Business. Of the collaboration, Dave said, "Depeche Mode has always been open to new ways of sharing our music, but re-recording a Simlish-language version of 'Suffer Well' just sounded completely bizarre. Of course, that's why couldn't resist doing it."5 A video for the song was also released, which can be seen below.

What is the writing sometimes seen on the back of Dave's hands?

They appear to be personal notes to himself. No one knows what they mean, but some of the words seen written on the back of his hand include "Enjoy" (most likely referring to the song, "Enjoy the Silence") and "Jack" (the name of his oldest son). Also, these notes seem to appear exclusively on his left hand which would indicate that he is right-handed. 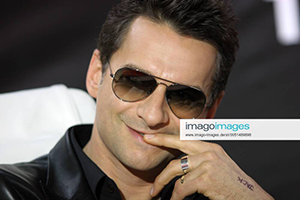 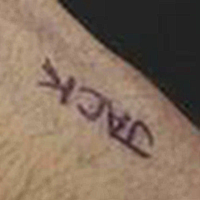 Is it true that Dave does not like the sound of his own voice?

Yes, he said this in an interview with Rolling Stone in 2005.1 This is actually a common phenomenon among people- even singers (see https://en.wikipedia.org/wiki/Voice_confrontation). But Dave has said in later interviews that he has at least grown more "confident" about his voice.2

Does Dave own any companies?

Yes. He owns a publishing company called JJSR Productions Inc. Founded in 2003, the company appears in the credits for all of Dave's musical works including Paper Monsters, Hourglass, The Light the Dead See, Angels & Ghosts, Imposter, Depeche Mode, and the film, Matilda, an urban ghost story. The letters, "JJSR," stand for the names of his children, Jack, Jimmy, and Stella Rose. He also has these same letters tattooed on the inside of his right wrist.

Can Dave play any other instruments?

Yes, he can play the harmonica and a little guitar. I've written about him playing the harmonica in this Paper Monsters song review, which also includes some videos of him playing it. He has obviously played it on some of his other solo and Soulsavers songs, as well, both in the studio and live. He can play a little guitar, as well, and there are numerous photos and videos showing him tinkering around with them, though this one is probably the most revealing:

In addition, there is a recording of him playing the guitar on Depeche Mode's Violator, on "Interlude #2 (Crucified)," as Alan Wilder confirmed on his website, SHUNT: "Dave plays a unique form of guitar. He has his own 'special' style. We used some of his playing as sound effects in one of the crossfade sections of 'Violator'."3

Has Dave written any movie soundtracks?

Yes. He and Kurt Uenala composed the music for the short film, Matilda, an urban ghost story, released on November 20, 2019. The film was produced by 18 Bleecker Films, an independent film company owned by Dave's wife and stepson, Jennifer Sklias-Gahan and James Rogers-Gahan, and stars Jennifer as the main character, Matilda. The film has won several awards and honors including being featured in the 2020 SOHO International Film Festival. A live Q+A panel was conducted among the film festival participants via video-conference on October 19, 2020, of which both Dave and Jennifer took part. The entire video from the panel is shown below, and you can hear Dave talk about the film's soundtrack starting at the 9:21 mark.

Has Dave appeared in any TV commercials?

Yes. In 2012, he appeared in a commercial for the Volkswagen Golf, which aired only in Europe. The commercial showed various people driving the car in different settings, each with a different cover version of Depeche Mode's People Are People playing in the background. The original version by Depeche Mode is also played near the end of the commercial, where Dave is shown behind the wheel (pun intended). You can watch the full commercial below.

Did Dave once try to open his own restaurant?

No. This was an April Fool's joke in 2007 orchestrated by Daniel Barassi (AKA BRAT), who runs the official Depeche Mode website. The scheme included launching a separate website announcing the grand opening of a restaurant in New York called The Bitter Apple, named after the song by Dave. The website included an online menu and page to make reservations among a few other things. For a short while, the site actually contained a link to OpenTable.com for making reservations. It was then subsequently removed as the company was not notified of the prank.4 Looking at the menu page, all of the names of the items are humorous takes on various Depeche Mode and Dave Gahan song titles (e.g., "A Steak That I'm Used To," "Dirty Sticky Ribs," "Milkshake The Disease"). There is also a blurb on the front page about "opening night entertainment" being "Guest DJ sets from Martin Gore and Andrew Fletcher." Sounds way too good to be true because, well, it is. The website can still be reached today at http://thebitterapple.com.