Now that Dave and Kurt's cover of "Chains" is out, you can read my thoughts on it here!

This website has received a lot of "fan mail" over the course of the past couple of years, and today, I want to share with you a particularly unique type of message that I have received over and over again during that time period.  These are messages that seem to be addressed directly to Dave or Depeche Mode...So, just to clear the air, please remember that this website is not in any way connected with Dave and/or DM, and that I have no way of contacting them!  If you are curious to read what I have received, then check out this article.  Note that for privacy reasons, certain details like names, dates, and locations have all been redacted.

Dave Gahan and Kurt Uenala are releasing a cover of the song, "Chains" (originally by The Raveonettes) on January 24 for the aforementioned band's new covers EP, Rip It Off.  Read my preview of the song here!

There are 2 new main magazine articles that have been uploaded to the Print Media section- one is from the June 2005 issue of Q titled "Apocalypse Jukebox" and the other is from the November 2021 issue of Sonic Seducer (a German magazine) titled "Dave Gahan & Soulsavers Kein Hochstapler".  The latter magazine also came with a sticker which I have showcased in the Memorabilia section! 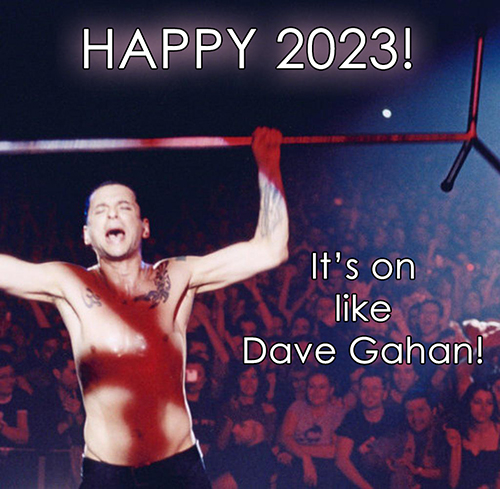 DGD wishes everyone a happy and prosperous 2023!  See you on the Memento Mori Tour!

New Article, "Catching Up with The Gahans"

Instead of doing another plain "Year in Review" type of article, I wanted to do something different and highlight all of the accomplishments of not only Dave Gahan himself, but also those of his immediate family members.  There are plenty of them to speak of this year, so this article highlights them all!

My review of Manuscript is now complete.  On this page, you can read my take on each track as well as my final verdict on the EP as a whole.

With the announcement of the new Manuscript EP by Kurt Uenala and Dave Gahan, there is now a new page dedicated to the EP as well as a review of its first single, "G.O.D."

Kurt Uenala and Dave Gahan have released a collaborative new single called "G.O.D."  They are also set to release a new EP called Manuscript on December 16.  Stay tuned for added content here about both the single and EP!

If you are in the US and the public television show, Front and Center, airs in your area, be on the lookout for the airing of the Dave Gahan & Soulsavers Imposter Tour performance from Salle Pleyel, Paris (originally from December 10, 2021)!  It is set to air on October 15 to kick off Season 11 of the TV show, but check your local public television listings for exact dates and times.