Creators and Shapers: The Women in Dave's Life

Stella Rose Gahan is Dave's one and only daughter. Dave loves to talk about his children in general as he also has 2 sons, and it is clear that he is fiercely dedicated to them. However, a daughter can often have a special place in a father's heart, especially when they're his one and only. And being no exception in Dave's case, Stella Rose is quite special. In this article, we present 5 facts you may or may not know about Stella Rose.


The word, "stella", means "star" in the Latin, Italian, and Greek languages. We do know that Stella Rose is part-Greek, as her mother, Jennifer Sklias-Gahan, is of Greek ancestry, so that is most likely where it came from. Also in Greek, Stella actually happens to be a shortened form of the female name, Styliani, which has a different meaning, namely "pillar of strength." It is unknown if Stella Rose's name in particular was derived from this or not, but either way, both are powerful-sounding names! It's unknown if Dave, himself, had a hand in choosing her first and/or middle name, but think about it- it's hard not to associate the rose flower with Dave and his band, isn't it?


Practically every child changes their parents' lives forever...that's basically a given. But what was unique about Stella Rose was that she came into the world at a pivotal time for Dave, in particular. By the time she was born in 1999, Dave had been drug- and alcohol-free for at least a couple of years. He had also just come off of The Singles Tour with Depeche Mode which was a pivotal time for the band, as well, for many reasons. From this point on, Dave's life was on the upward turn, as he was finding renewed success career-wise and personal stability with his new wife, Jennifer Sklias-Gahan, in New York. She already had a son named James Rogers-Gahan, whom Dave became very close to and eventually adopted as his own1, and so with the new addition of Stella Rose, they were quickly becoming a family unit that would serve to be a very positive influence on Dave from then on. But Stella Rose is Dave's first and only daughter, and I can attest through personal experience that a father-daughter relationship is unlike any other in the world, especially when the father is deeply involved and nurturing, like Dave seems to be. From the daughter's perspective, the father is the first male figure she knows and falls in love with, and he shapes her life in both obvious and non-obvious ways. Likewise, she shapes her father's life in ways big and small, as well.

3. Dave has written a song about her 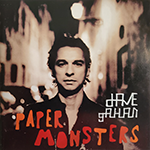 At the time when Paper Monsters was written, Dave had finally gained the confidence to show off his songwriting skills to the world. Drawing from various very personal experiences, the subjects of the songs on that album ranged from dark and painful to light and joyful. As a proud father to a very young Stella Rose at the time, of course he would celebrate his only daughter and write a song about her. This song was the sixth track on the album, "Stay," and Dave made it clear in an interview that this song was about her (see this page for more information). One only needs to hear this song and listen to the words to get the idea that he absolutely thought the world of her. He describes her as a "shining angel" and "tiny star," no doubt the latter symbol chosen deliberately in honor of her very namesake. She is also equated to "color" among "shades of grey," a powerful image of the pure delight that she must've brought to her parents just by her very presence.

4. She created the cover art for one of Dave's albums 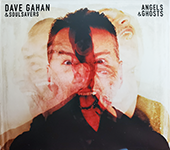 Yes, that's right- Stella Rose was responsible for the cover art for the 2015 Soulsavers album, Angels & Ghosts (see the image above)! "I didn't tell anybody at first," Dave said. "I gave the image to my manager and the record company and everything, and once they were kind of like, 'Wow, those are cool images,' I said, 'Actually, my daughter did that.' So I'm really proud."2 Consisting of multiple composite photos of Dave displaying various extreme facial expressions from the front and sides, it gives off a somewhat frightening and ghostly appearance that fits the title and theme of the album nicely. It would be safe to say that Stella Rose loves to experiment with photography and is very keen on the visual arts; in fact, she has studied photography in college.3

5. She is a singer and musician just like her father

Stella Rose also has a knack for music and singing. "When I first heard her sing, I knew immediately that she had something really special with her voice, because she has this voice that is rhythmically tuned in," Dave once said. "Everything about it, she just kind of has naturally."2 In as recently as 2018, she was studying music at the University of Southern California. There have also been videos floating out there on the internet not too long ago of her singing and performing; if you happen to stumble upon one of these, you just have to get a load of that voice! It is clear that she has her father's genes when it comes to singing and performing. Imagine what it would be like if they collaborated and sang together? The possibilities...For now, though, she is finding her own way in life and understandably does not want to merely live under her famous father's shadow. Only time will tell if she will become a star in her own right, but it definitely sounds like she has the talent and know-how to make it in the music business if that's exactly what she wants to do.

So, what do you think about this article? Do you have any details about Stella Rose Gahan that I missed, or simply want to get something off of your chest? Who would you like to see featured in a future installment of "Creators and Shapers?" Please comment below!